On 17th July, Instagram announced on their Twitter that they were running tests to hide the number of likes and video views for people in selected countries, namely Australia, Brazil, Canada, Ireland, Italy, Japan and New Zealand.

“We want your friends to focus on the photos and videos you share, not how many likes they get. You can still see your own likes by tapping on the list of people who’ve liked it, but your friends will not be able to see how many likes your post has received.” – Instagram’s Twitter. 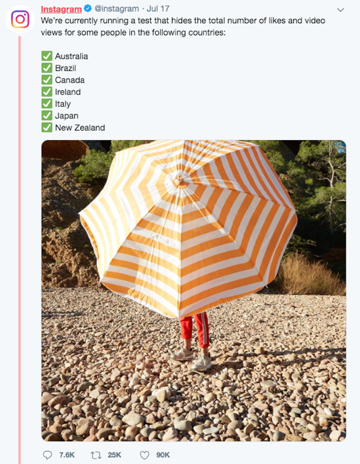 With the above Instagram quote, it’s clear that Instagram – like Facebook – is going back to prioritising the social aspect of the platform. Research has also connected the use of social media with increased levels of anxiety, depression, loneliness and lower self-esteem in teenagers.

But what does it mean for users, especially influencers whose bread and butter are based on the number of likes they receive on a daily basis?

Businesses and influencers can still see the number of likes that they receive, however, it’ll only be available to them and not their followers.

Will comments be the new ‘Likes’?

With the number of Likes now being hidden from followers (unless they count each and every single like…), there is a possibility that comments will soon be an indicator of how people are interacting with a particular Instagram post. This also means that it would be harder for users to “pay” for likes and therefore, fake their popularity.

Allowing content to be judged by its own merits rather than being influenced by how many likes it has received.

Remember the World Record Egg post that beat Kylie Jenner’s post about her daughter, Stormi, and became the most-liked post on Instagram? That is an example of how ‘likes’ can often be a meaningless indication of success. Why would you like a photo of an egg anyway? (Do note that this was before the team behind the World Record Egg revealed that they were raising awareness for mental health).

Many a time, we have seen a post that we know has been beautifully curated or skillfully taken. However, due to the fact that it did not receive that many likes, it has instead been pushed to the bottom of your timeline. Now that the like count is “out of sight”, the focus is now on what you are posting instead on the number of likes.

Instead of focusing on the number of likes a post receives, businesses on Instagram now have to be more creative in looking at what is actually working. This means that we have to evolve from our current mindset of using ‘likes’ as a success indicator, to dig deeper into ‘hidden’ analytics like reach, impressions or even the number of saves as better indicators on how a post is performing.

While the test is still ongoing, it will be months before Instagram announces if it is going to be a permanent change or not. This might be a shocking transition for a business to comprehend, but we are definitely welcoming this refreshing idea of change. We will definitely be keeping ourselves updated on the status of this and see how this will impact our future designs and content proposals – though it already aligns with our mission to create quality posts and not with a “Do it for the ‘gram” mentality. We are excited to see how businesses will bring this forward!