The ethics of advertising

This month, a lot of very deep conversations were triggered within our agency by a piece of news announcing that Google had been fined an historical $170 million for violating Children’s Privacy on Youtube. 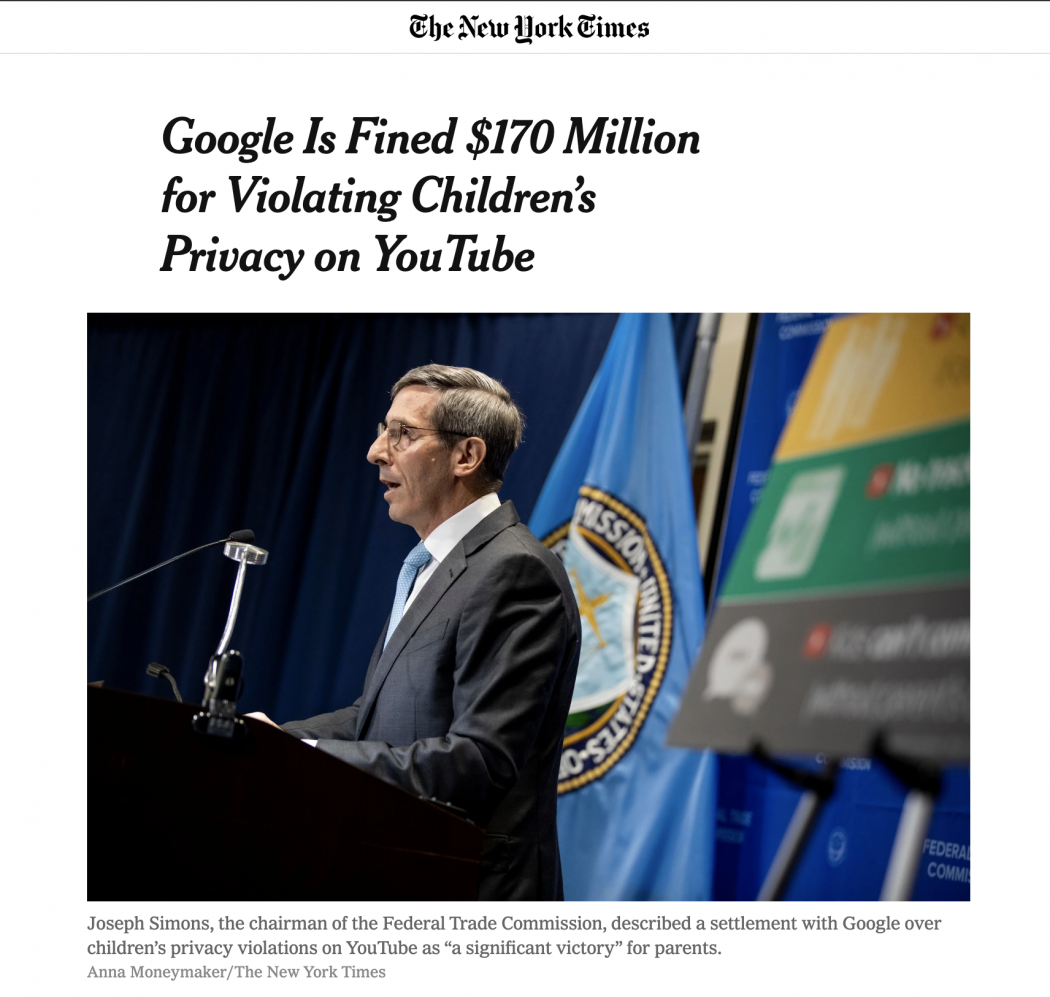 We wanted to bring this up here today because this specific piece of news has opened (or should open) a real debate around the ethics of advertising. It raises a lot of questions, and although we wouldn’t presume to have any of the answers, as proclaimed actors of change, we found that raising those questions publicly – however controversial they might be – was extremely important.

The fact is, what Youtube did WAS sketchy, abusive and highly questionable – some elements of children privacy are definitely to be protected against any sort of invasion, but then as we were reading through the accusations and measures taken against the media giant, we couldn’t help but ask “How is that different from traditional media advertising?”

To set our bases straight, let’s look at understanding the issue at hand from what we understand from the articles we have been reading – and as this is really meant as a discussion point, we welcome any comment and/ or rectifications (you can reach us through our Facebook private chat or via our online contact form)

What does this means in the real world? This mean that your child, watching cartoons on Youtube would be exposed to seeing ads for toys for example, sweet beverages, cool sneakers, or whatever kids can be influenced to buy or like through communication.

Why is targeting so important in the advertising world?

Well, because it means that your message is shown to exactly the right person, the person that is most likely to buy your product/ service, etc. Let’s say you want to sell super cool hiking shoes that are ideal for desert treks, this means that to optimise your advertising budget, minimise costs and optimise conversion rate, you will want your ads to be seen by people who are super passionate about desert treks. If you show it to someone who love lounging in the sun and hates sports, your chances to sell your product from this media exposure is very low.

In the case of children, they are not the ones making the purchase but in many cases they are the “influencers” – they see something that they like or looks really interesting, yummy or is shown as the way to become popular in school and they will “influence” parents to buy that (think about the lists for Santa).

Why is it so controversial to target advertising to children?

As adults, we are targeted by ads all day long, but the thing is that our society and our laws are based on the assumption that as mature adults we are capable of discernment and able to know better to avoid caving in to advertising manipulation. However, children are innocent, they don’t have the filters that we have built over the years and are to put it in simple language “easy to influence”. This makes them very vulnerable targets for powerful advertising messages specifically designed to stirr certain emotions within them.

So what is the issue or question here?

As part of the settlement that has been reached, we have been reading things like “YouTube must also obtain consent from parents before collecting or sharing personal details like a child’s name or photos” and this seems absolutely obvious. (The real question here is why did they not have to do that before honestly).

However, we also read this: “YouTube also agreed to create a system that asks video channel owners to identify the children’s content they post so that targeted ads are not placed in such videos” – and it gave us pause.

Why? Because, how is placing ads on videos made for children on Youtube any different than placing ads on TV channels during the children segment, or on Disney Channel, or Nickelodeon – or on children’s magazines?

Children have been exposed to advertising through traditional medias for years now, so how is online media any different? Or are we saying that we should eliminate advertising targeted to children on ALL platforms both digital and traditional? How would those content creators survive then? And how would “children brands” exist? Because, if some products/ services that are currently being “sold” to children are of negative influence on their social and cognitive development or their health, some companies offer products and services that are extremely beneficial for children’s development.

With this in mind, shouldn’t we think about controlling the “type” or content of the advertising shown to children rather than banning it altogether? What would be the guidelines if we did?

And then, from a more personal standpoint, as advertising agencies, media agencies and brands, we influence perceptions and behaviours everyday. What is our responsibility? Shouldn’t we all work within this very influential industry with a strong moral compass? Where does our responsibility start, and where does it end?

Or is the point simply that companies should NOT be gathering personal datas about us at all? We have already seen the deviance of such access when our datas are used to control our political opinions. So should such measures be extended to all of us?

A very wide subject, but well worth the time to pounder in our opinion. And you, what do you think?