Why is marketing important?

If you’re a makeup enthusiast (or addict) like we are, you must have heard of one of the biggest international launch in the makeup community. Shane Dawson x Jeffree Star Cosmetics launched the Conspiracy collection on November 1st. The website crashed before it even started, with Shopify claiming that this is one of the most traffic their server has ever encountered. Everything was sold out in 1 day, and the marketing promotion was an important reason why.

We will not go too much into details of what exactly the collection consists. We ourselves have not tried this product yet, but it is marketed to be of a great quality and is manufactured in the USA. The price point is slightly more expensive than an average palette, but the pan size is larger than the rest. We have been through hundreds of makeup launches this year, so what makes this one so special, so overwhelmingly purchased?

We believe there are a couple of factors to take into consideration, more than just the product itself. The People Behind It
Simply put – Shane Dawson and Jeffree Star are ultimately some of the biggest influencers in the Youtube community. Shane Dawson has more than 23 million subscribers and Jeffree Star himself has more than 16 million subscribers. They each have been on the platform for more than 10 years, with 7 billion combined views on their videos. The numbers alone are astronomical!

Shane Dawson is well-known for his comedy sketches and conspiracy theory videos, but in recent years has ventured into more documentary-style videos that often focuses on one main character. The makeup launch docuseries has been so positively well-received, with one fan saying « Shane needs his own Netflix series omg ». That comment has gotten 26000 likes – it has clearly resonated with many.

The beginnings of their friendship goes back to 2018. When Shane first started a 5-part series, that tells the story of Jeffree Star, his life, his dreams and his business. To date, Shane’s most popular video « The Secret World of Jeffree Star » has garnered 46 Million views. It brought him to implement this similar style of documentary. That featured the lives of other famous personalities such as Jake Paul, Tana Mongeau and Eugenia Cooney. With the positive change he brings into others, it was time to start thinking about marketing himself.

The Hype Around It
After a chain of successful documentary-style videos in 2018, Shane Dawson shared that in 2019 he was going to focus on one main story. He shared that he was going to launch a makeup collection together with Jeffree Star Cosmetics. The whole process from ideation to completion will be documented and released at the end of the year. Bringing viewers behind the scene, was a risky move, but it told an engaging story for consumers and disrupted the way makeup has been presented in the industry. Usually, brands would announce a marketing teaser about 2 weeks before launch, and that was mostly it.

The retail apocalypse is well-known – brands are struggling to keep up to the fast-changing trends. Big retail brands are closing their stores one after the another, and businesses are constantly having to reinvent their business model and their marketing campaigns to suit the needs of a target group that gets bored fast.

How is Savage x Fenty Lingerie brand by Rihanna getting more popular than Victoria’s Secret? How did Jeffrey Star and Shane Dawson get people to buy their makeup collection over the thousand other launches? Because these brands know, and understand deep down, what their consumers want. They choose to tell the same story in a different way, to create an emotional connection with the consumer. Consumers want a lingerie brand that suits ALL skin tone, and ALL body shapes, Savage x Fenty did that. Consumers want to know how a makeup palette is made, and how much it cost to make one, and indeed Shane showed us that. The hype is in the way the story is told. 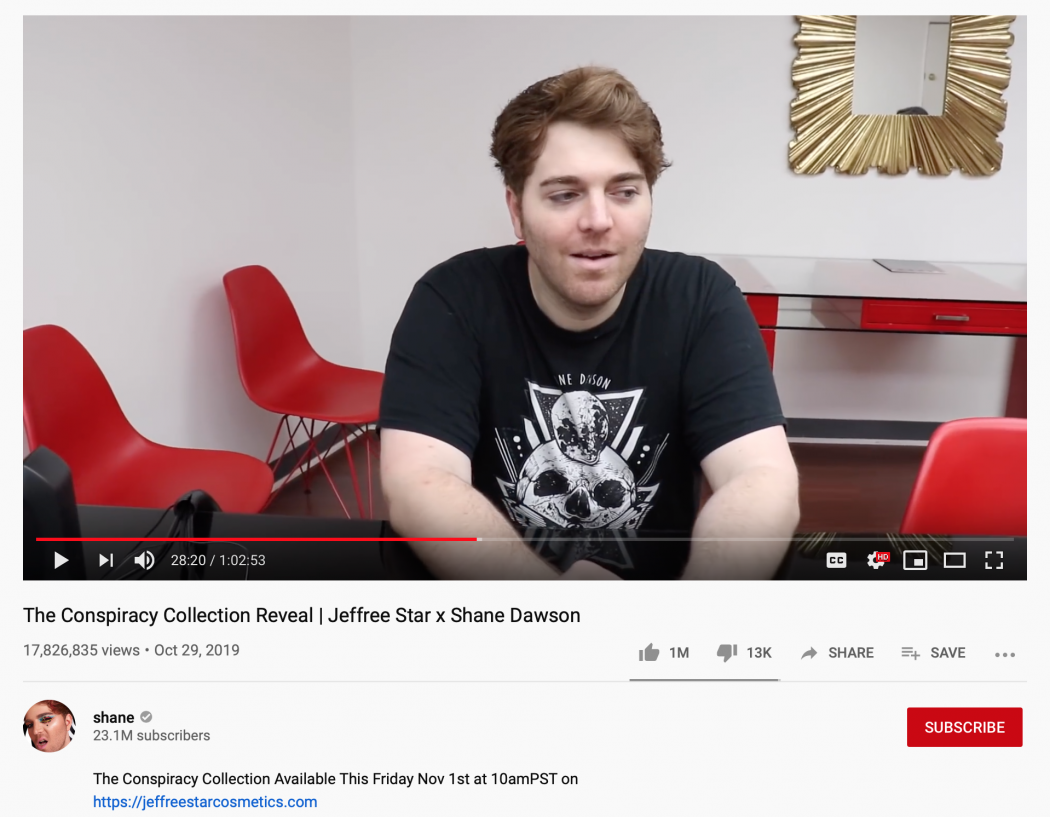 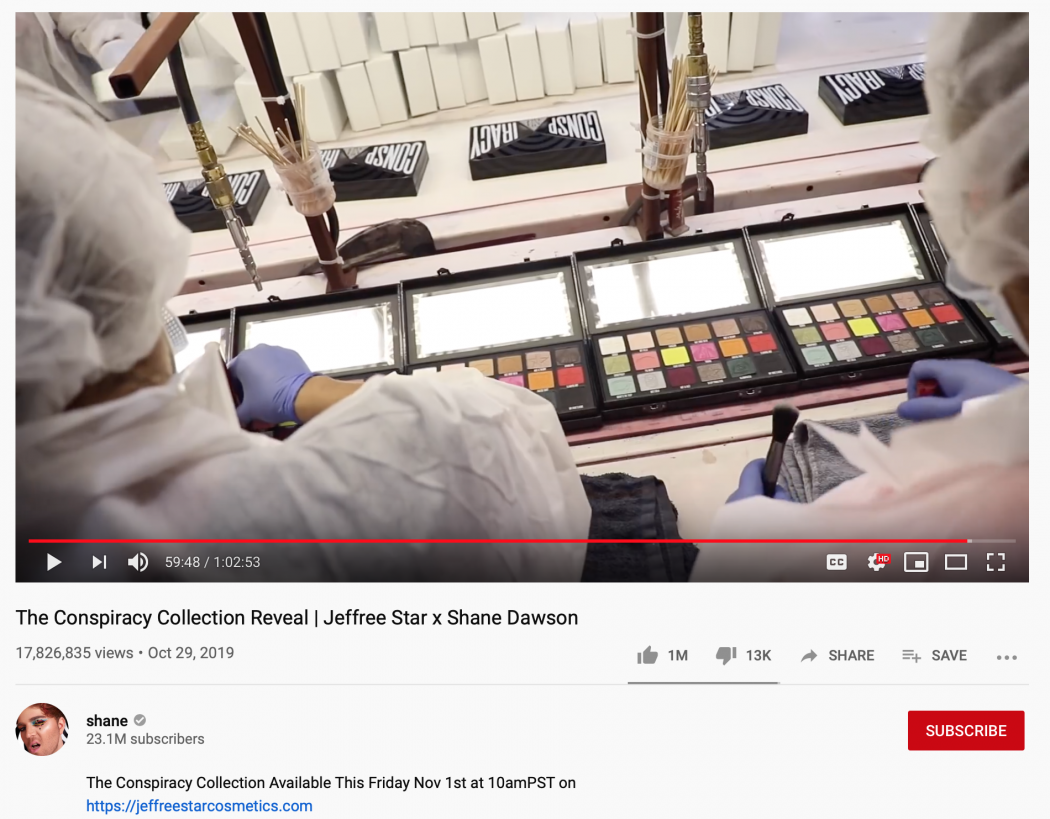 Engagement is king, we always say. According to We Are Social’s Global Digital Report 2019, the most visited website after Google, is Youtube. An alarming 92% of internet users stream videos online. Youtube is the perfect platform for longer-form storytelling compared to Instagram. Over the period of two months that began in September, the first 6 episodes have already received 115 million views in total.

The slow build up of the series began back in the beginning of 2019, that had already generated a lot of excitement for god knows what. Consumers had zero clue what was going to happen, and that helped build the intensity from the beginning.

Towards the end of September, a trailer was released to tease the collaboration. Week by week, as the episodes became live on Shane’s channel, the audience got a preview of how the collection was created. From the colours to the names of the shades, it was a marketing campaign from the start meant to build the hype surrounding the products. It was essentially a 9-hour long commercial – so how come consumers would voluntarily put themselves through that?

Well, the story follows the classic American Dream storyline – for 2 men who started out without much. They worked hard in a competitive industry and survived. Now, they decided to join forces to create something bigger than themselves. The audience was obviously invested. Shane himself is not a makeup vlogger and he knows that, but he showed his dedication to learning more. He bought and tested makeup from many different brands. In order for him to know what works and what doesn’t work, it helped propel him into an approachable and relatable character. We call all relate so well to that, and we just want to support a fellow peer who is trying his best to perfect his craft.

Many non-fans have expressed how the colour combinations in the eye palettes itself, were surprisingly wearable. It catered to consumers with different needs. For those who want just a simple neutral look for everyday work life, or add a pop of colour for a fun day out, it was all possible.

Spoiler-alert, they have gone on to sell 1 million palettes in a span of 1 day, despite the technical difficulties encountered. That is an estimated USD 35 million revenue!

At the end of the day, here are some key takeaways:

2020 was a difficult year for all of us, where some might even label it as « the worst year in history ». For us at Lime, we are taking this opportunity to reflect on how 2020 has ...

According to trendwatching.com, one big trend for 2020 is « Consumer Metamorphic« . Meaning, consumers are constantly changing and a perfect fit means constant adaptation around the changing individual. Basically, we have become so used to technological tools ...